Two years ago, I had the opportunity to conduct what wallstreetbets might call an extensive “due diligence” of an academic altcoin (i.e. I had to read and digest a paper for a grad class). This particular protocol claimed to address nearly all of Bitcoin’s shortcomings by orders of magnitude, and after spending hours bashing my head against its cryptographic algorithms and security properties, I was finally convinced for myself and, suitably impressed, decided I would also make an investment.

Little did I know my investment would have been far better off if I had just yolo’d the money into Dogecoin instead (and I probably could have spared my feeble cognitive abilities from a headache as well).

Dogecoin! I mined that crap in freshman year - not that I had to, considering it was also being given away for free at every possible opportunity. Dogecoin, an obnoxious satire piece, the topical antidote to the absurdity of Bitcoin. Seven years later, this absurdist work of art, if you will, is now worth 100 times more than MoMA’s entire collection - and Bitcoin is not one drop less absurd. The jurisdiction of Poe’s law is approaching a constitutional crisis. 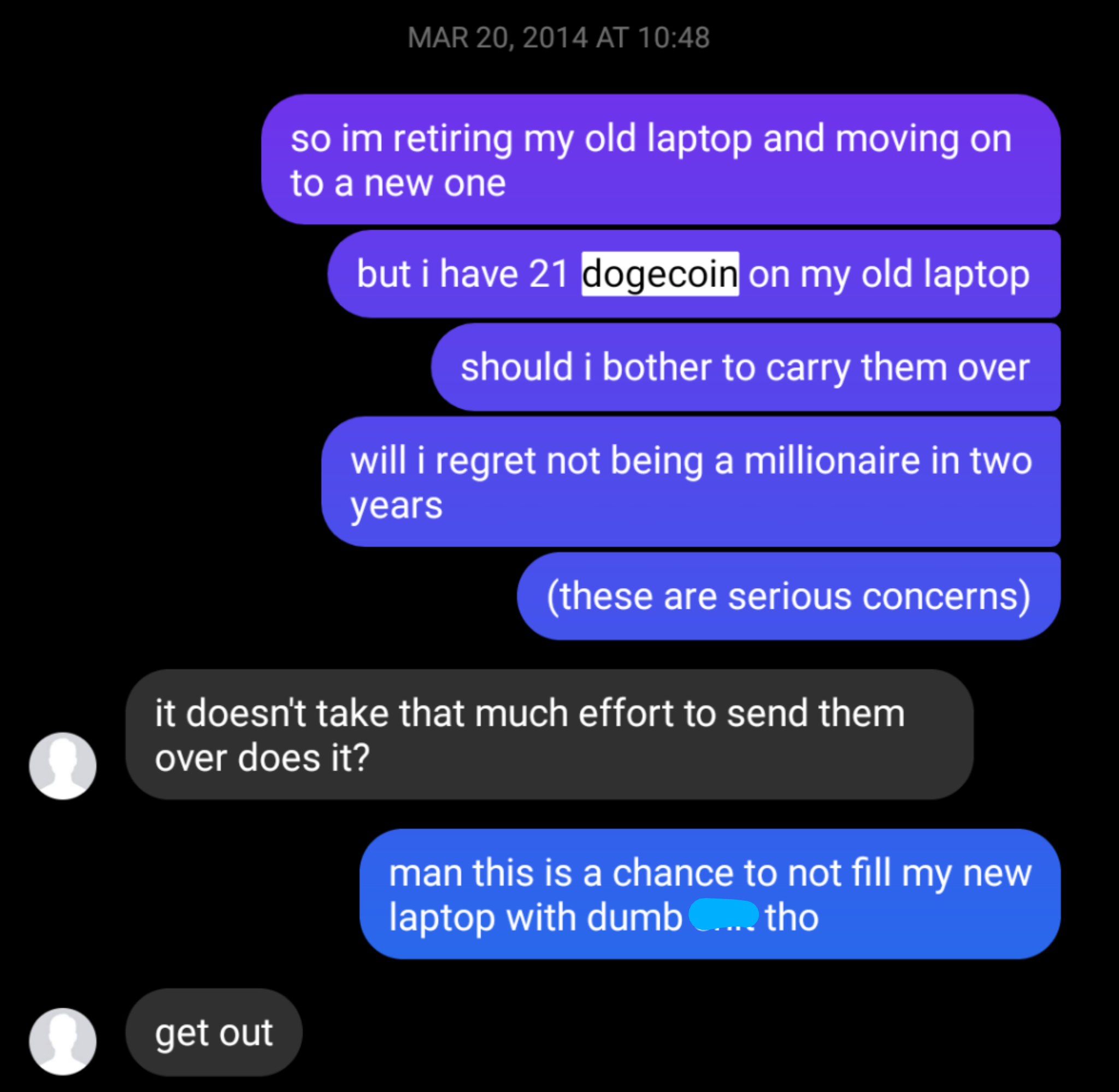 (Tomorrow’s headline: yours truly goes missing after scavenging landfills for $12 worth of Doge)

I am certainly not the only one these days to be baffled by the increasing reluctance of prices to reflect “fundamental value”, but like most people, I have come to accept our current reality.

Well, most people. I am still occasionally told that I should be wary of participating in such pump and dumps. Believe me, I thought Bitcoin was a pump and dump in 2014, but I am not stubborn enough to hold that belief across seven years (although I do occasionally still fantasize about its spectacular unravelling).

There’s this cute saying – “the markets can stay irrational longer than you can stay solvent” – previously used in reference to hedge funds that predicted the major market crashes but built short positions too early, and now used in reference to, well, pretty much everything going on. “Irrational” is an interesting choice of term - it implies that you’re the one who’s got it all figured out! Unfortunately, none of the participants in the market are losing GPA points in their game theory classes for choosing valuations differently from you. If you find yourself insolvent, well… opinions about your rationality aside, it likely means your model about the markets is just not as complete as you thought it was.

And, even more amusingly, I still occasionally encounter the individual on the left below: 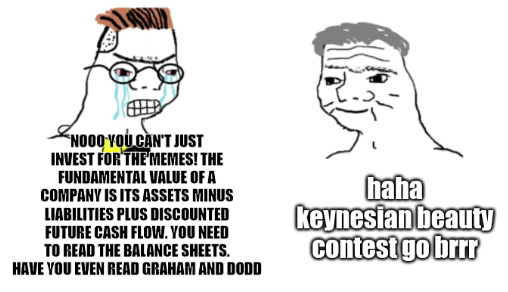 I’d say I’m surprised that anyone in my generation still holds such dated perspectives on investing, but embarrassingly, “Keynesian beauty contest” was also coined only two years after Security Analysis was published. Hmm. Well, at least I hope these poor individuals never have to learn about stat arb.

Who among us hasn’t looked out at the great edifice of human civilization in all its complexity, and thought “Yeah okay but I could do it better”?

Thanks, Scott Alexander. Every word you write makes me feel a little less alone in this universe.

I’m a big fan of planned cities (living in the infrastructural disaster known as the United States, how can I not be?). I loved my time in Singapore and Hong Kong, and I’m dying to visit Shenzhen and Dubai – as soon as All Of This Is Over (TM), of course.

This article is about a charter city that pushes the envelope even further: It’s located in one of the most dangerous countries in the world (!), and it’s governed entirely by private enterprise (!). It even has its own social contract (the philosophy majors must be delighted).

This sort of stuff is very interesting. Radically improved economic prosperity from competent governance has previously mostly been “limited” (not to make their great work sound undesirable!) to citizens of the nations able to pull off such efforts. But there are a lot of less prosperous nations who are inequipped to do such things, and who one might feel are “left out” of the advances of first-world nations. Próspera is a moonshot for sure (I don’t buy the article’s argument that geopolitical volatility won’t kill the golden-egg-laying goose – as if recent geopolitical events are any more rational!), but it certainly would be wonderful to see the model succeed, replicate, and catalyze the development of nations the world over.

Enough rambling from me. Go check out the article! It’s full of pretty pictures and cool facts.